Apparently #nashvillecarpet is trending on Instagram. I just so happen to have a quick stop in Nashville on my way to NY and decided to give you a glimpse of what you’re missing. 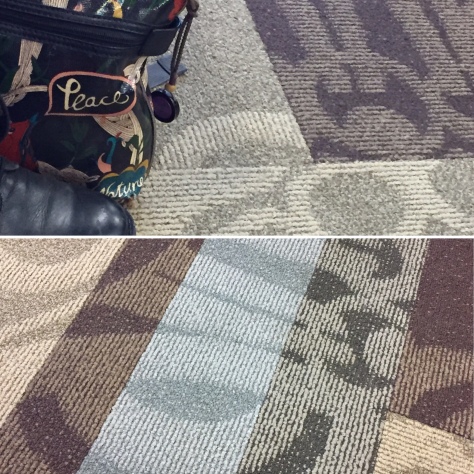 While we are chatting, can we talk about the number of people who take up seats in the waiting area with bags and stuffed animals?

My youngest, Shawn, and I were cleaning out the pantry after seeing ants marching in a single file line into and out of my pantry. I battle ants every single summer. They vary in size but they always show up. Each year I try to find the least toxic way to discourage the ants from taking over my pantry.

As we pulled every item from the pantry and I sprayed a non-toxic concoction containing peppermint oil (insects supposedly hate peppermint). Remind me to tell you about the time I kept finding peppermint candies in random places around the kitchen because I mentioned the repelling nature of peppermint to insects to the kiddos. Never mind, that’s basically the story.

As I cleaned the higher shelves Shawn discovered something on the lower shelf. The majority of the ants were congregating around the jar of coconut oil. Upon further inspections, I found what must have been hundreds of dead ants inside the jar. At this point I didn’t see any reason to make the ants work harder so I removed the lid and let them have at it.

The ants are the reddish brown color you see.

For about seven days we watched as the ants marched to that jar. They must have told their friends, cousins and coworkers because the number of ants steadily increased. Not all of them made it out of the jar. I wonder if those that left kept their mission in the forefront of their minds while the others were overcome with glutton and decided to stay and engorge themselves with the oil which led to their demise.

Eventually the line of ants grew thinner. The corner of my pantry was less crowded. Finally! Then it ended all together. They must have killed the queen. We had been successful. We were ant free for a few weeks. When they returned, I put a bit of coconut oil on the path they used to get to the pantry. Yes, I tried sealing the hole but they got through. However, they stopped at the toothpick, ate and left. I’m happy to say they moved on. Next summer I will have a jar of non-organic off brand, not extra virgin, inexpensive coconut oil waiting on them.