Once upon at times there was this super fly chick who apparently had it going on. She was in her early 20’s, working two jobs, roommates with a really good friend and living her best single life.

She was the recipient of two previous proposals of marriage. One she said yes to but later realized it just would not work. The other she laughed off because they were not on the same page about education. When someone doesn’t value something important to you, keep moving.

This one was different. It was more of a pre proposal negotiation.

The two of them had known each other for years. They met through her brothers as children. They attended the same high school. They had many of the same friends. They were always friends but never had a romantic interest.

After they both graduated from college, they found themselves running into each other more often. There was still no attraction. Honestly, she liked on of his friends.

One day he dropped by the townhouse she shared with her roommate. They hung out for a while then as he was leaving he made a proposal. Let’s get married if we are both single at 30. She smiled as she pondered this request. It wasn’t a bad idea.

They had known each other forever. They had great relationships with each other’s family. She asked one question that would determine if this was a viable option. How do you feel about your wife staying home after having a baby? This was something she wanted as an option. She didn’t want it forced on her like the first proposer would have. She wanted to know that she had a choice.

He responded, that’s fine. Her heart beat quickened. Maybe… Then he said, I don’t mind if she doesn’t work for the six weeks of recovery. Her heart sank. She went on to explain why that option was important to her. He explained his vision of a dual income family. They hugged as he left and still remained friends.

Legend has it that she’s still fly and still has it going on.

Once upon a time in life lived long ago, there was a darling little girl. She lived her life as care free as any at her age. As most people do, she was turning a year older and excited about her birthday.

There were only two things she really wanted. Those two items were a bicycle and a Raggedy Ann cake. Since she loved dolls, of course she would want a doll cake.

Her father promised he would bring the cake and bicycle to her party and he did. When he walked in the house with her cake she could barely contain the enthusiastic, muffled shout of glee. He didn’t look as excited as she was.

He knelt down and said, I’m sorry baby. I accidentally dropped your cake. She looked him in his eyes, smiled and said, it’s okay. I love my cake.

He thought he ruined the party but she was happy to have her cake, her new bicycle and her dad. She still remembers that day so many years later.

When I was a little girl, I loved school. I really mean it. I loved everything about my elementary school. I loved the library. I loved piano lessons by given by the music teacher, Mrs. Walsh. I loved all the games we played during PE including red rover, kickball, four square, dodgeball and tag.

All of that was before “everybody is a winner” became a thing. I’m convinced that movement was started by the people who were always picked last. I was typically a team captain. Now that I think about it, the teachers were kinda savage. They never let the last kids picked be captains of the team.

I didn’t have a backpack or book bag to carry my books. I remember searching around the house for something to hold my pencils. I found the prettiest purple bag with a string at the top that was just the right size.

One day my mom saw by bag and took it from me. I remember being confused. My mother was never one to give explanations to her three children. She took that bag and replaced it with something else around the house.

As an adult, have you ever had a flashback to a moment in time from your childhood? The first time I saw a crown royal bag, I flashed back to my beautiful purple school bag. Now I understand why my mother took the bag from me.

I wonder what our teachers thought of us as students. We were from low income families but I personally never felt judged. I’m thankful for my elementary school teachers. They cultivated a love of learning in me and encouraged me to achieve goals I had not thought of.

To the teachers who are teaching students who are socioeconomically challenged, and helping them see themselves beyond their circumstance, thank you!

My second child and favorite daughter graduated high school in May and is away at college.

The other night I asked her if she wanted me to read her a bedtime story. I was not shocked or dismayed when she declined my offer. I told her I would use my blog to write stories for her to read when she’s awake during vampire hours rather than sleeping.

Once upon a time, there were two little boys whose ages were three and one. They were living their best toddler lives when their mom suddenly disappeared. Where is momma!? They were distraught and confused. She hardly ever left them.

Their grandmother made multiple attempt to console them. Nothing seemed to work. They cried and whined until she finally had enough. She bathed them, gave them warm milk and put them to bed. (Side note, this was a black household back in the sixties so they probably got a spanking or at least were told to be quiet but in this post corporal punishment world, we will go with warm milk and a bath.)

After a few days, their mom came back home. The boys were so excited to see her. What they were to young to understand was, their mom went to the hospital to have another baby.

The mom removed the blankets that covered the newest edition to the family. The baby girl was introduced to her brothers.

The brothers looked upon their sister with amazement and curiosity. They inspected her from head to toe. The one year noticed something protruding from her belly button. What could it be? Being the curious fellow that he was, he pulled it off.

The curious brother was confused when the baby started crying. His mom was upset. But why? Momma ran out of the door with the baby. Momma!!! Momma! He was inconsolable.

He unknowingly pulled of his sisters umbilical cord causing his mom to rush his newly born sister back to the hospital. She survived the ordeal. This story became part of the family oral history. Now it’s yours to share.

I may be taking a leap here but I think this story was the inspiration for this Silly Song. Veggie Tales: Bellybutton

When I was a little girl I loved to read. I was always checking out books from the school library. Sometimes I read several books a week. I didn’t spend all of my time watching the few channels we had on tv. I spent my days and evenings exploring a variety of places and living different experiences along side the characters in the books.

Then summer came along and I no longer had access to a library.

My neighborhood didn’t have libraries or bookstores. We could buy books or magazines from Eckerd Drug store or Tom Thumb but the selection was limited and I didn’t have any spare change.

I looked for libraries in the yellow pages and could not find any within walking distance. Waking distance back then was a few miles, not across the street or around the block. In the end, I road a city bus and walked a mile or so to get to the closest library and check out as many books as I was allowed at one time.

As I grew up and moved to the suburbs, I realized that libraries could be within walking distance of your home. I took my children to reading time at the library and they participated in summer reading programs.

It has been proven that reading has a very positive effect on children and adults. Why don’t all neighborhoods have libraries within a certain mile radius? Why isn’t that a priority? If we invest now, we pay less later.

You were planted in my dreams before you became a reality. I loved the thought of you from the beginning.

Did I ever tell you that I always wanted a daughter? I wanted to experience the mother daughter bond. You are everything I hoped for. Although it would have been nice if you would have tolerated bows and tiaras.

I want you to know that I’m proud of you. I love who you have become as well as the thought of who you will be.

Happy 18th Birthday to you!

I am a huge proponent of organized sports. I believe in the team work, losing and winning, developing skills, exercise and learning how to deal with people in general. All of the kids played a sport early on.

The daughter stopped after an unfortunate soccer season. For some reason she was hit in the head with a soccer ball every single game. I’m not exaggerating. Every game. The coach gave her an award at the end of the season for that accomplishment.

My youngest is a good athlete. He’s competitive. He’s coachable. He’s going to give his best.

Usually during baseball practice I would take the opportunity to walk around the complex or run errands. One day I arrived just in time to see the boys run from home base to the back fence. I also noticed my son still at the home plate while everyone else took off running. I asked him about it after practice.

The coach imposed a five second delay on him because he kept beating all the other boys during the race.

I could have played the race card here since my son was the only brown kid on the team. I could have gone to the coach and complained. But instead I told my son to beat them every single time. Show them that they can set you up to lose but they still won’t win. Show all the boys and coaches that you are a force to be reckoned with. And he did. 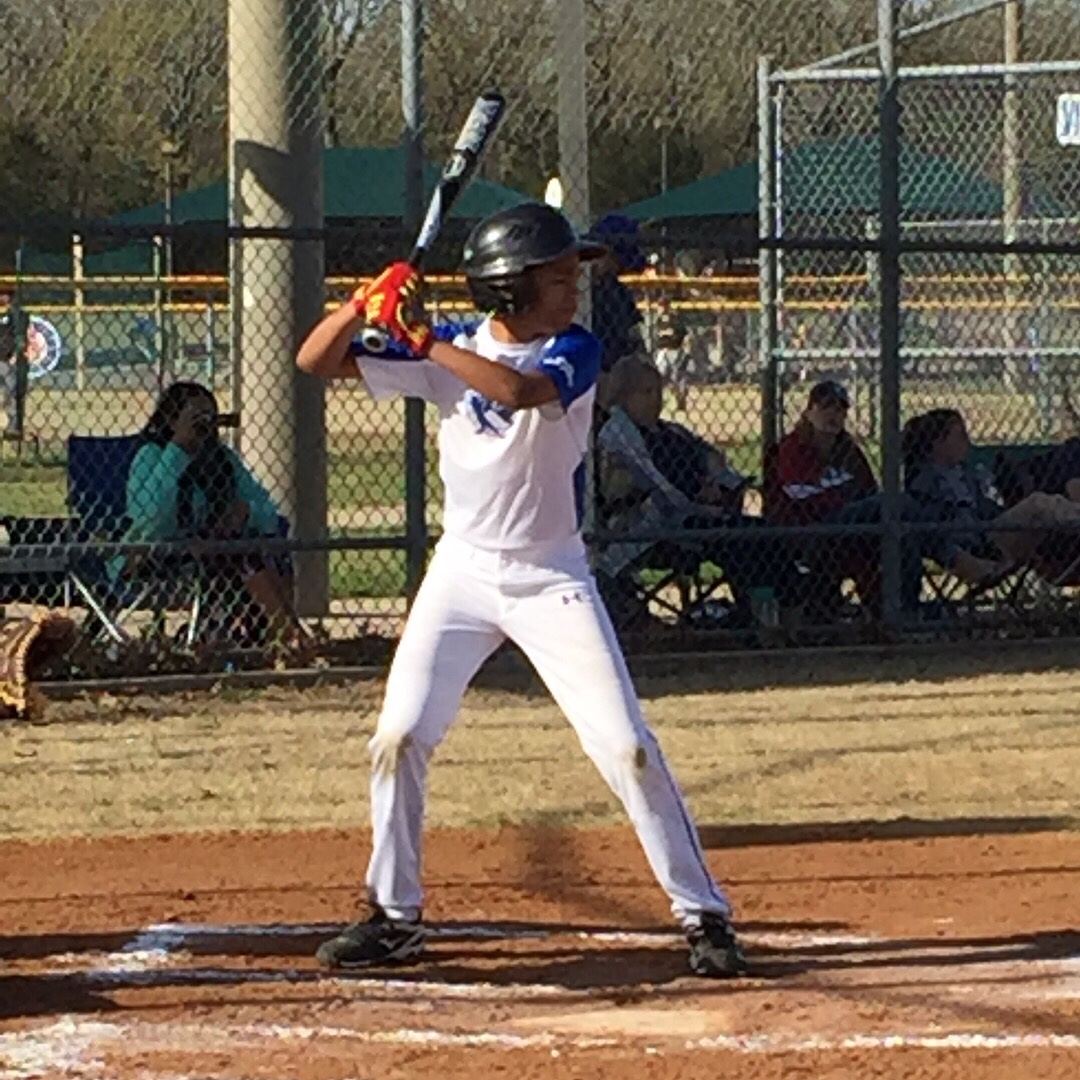