It has been said, “The early bird gets the worm.”

I say to you, “The late owl gets the rodent.”

The initial phrase was coined to encourage getting up early as a measure of success. I can see that being the case in an agricultural environment.

We moved from agriculture to manufacturing to technology where time is fluid, electricity is plentiful and success is no longer measured by how early you rise.

I will continue to be the bird. You continue being the owl. I’ll see you before the sun rises.

I took a short break from bedtime stories while my daughter was home from college. Now that she has returned, I’ll recommence.

The year was 2004 and it was an election year. The two kiddos were attending a mom’s day out and the mom was working there for the free tuition. She was willing to do that for her children. The already strained budget would not allow any additional expenses.

The mom had hoped her children would be prepared for school. She had already taught the oldest to read, some writing skills and basic math. But a three day learning program was also an opportunity for her to get out of the house, teach other children and bring in a bit of income.

That year, the two year old daughter was excelling in one particular skill. She could place her hand in any condiment and create a perfect hand print on her napkin. She did this so often the parents were confused and not at all amused.

They went as a family of four to vote. The mom and the five year old son had an impromptu civic lesson. At the same time, in an adjoining booth, the dad and the two year old daughter were having a disagreement.

As he held her in his arms, he began to fill out his paper ballot. She, seeing the paper and pencil emphatically stated, “Draw my hand!” He immediately replied, “No!” They went back and forth a couple of times until finally out of frustration and realizing the lack of understanding, she provided him with additional instructions.

“Daddy, you take that paper and that pencil and you draw my hand!” He refused and she was upset.

At the end of the Mom’s Day Out school year, the families received a book filled with a variety of hand prints and drawings from their child. It was definitely an aha moment. It all made sense.

Rumor has it, she is still trying to tell her father what to do and he is still saying, no.

You know how people obsess over their first born? They take photos everyday of all the wonderful and cute things the first born does? They are extremely cautious and protective.

Have you seen those parents with more than two kids? That third child or in my case fourth child apparently didn’t exist until he was two. We had pictures from the day of birth and then nothing until his second birthday. It’s as though there was a moratorium on photographs during that time.

How do you tell that baby you opted out of a shower? I had two baby showers or more with each baby, except for Shawn. There is only 15 months and a few a days between he and Josiah. How do you say, I was tired? I was too practical? It was a mistake? Friends and family offered to host a shower for me but I said no. The only thing I wanted and needed was a double stroller. I met with one friend and one family member at a restaurant where they presented me with the stroller. This definitely predates selfies. I’m not sure if we asked a waiter to take our picture.

Then one day a few years ago I put out an APB, I turned on the bat signal, I called, sent text messages asking friends and family to scour their photos to see if there were any pictures of Shawn. A few were located. I was relieved. I showed him the few that were sent to me. He have me that smile he gives when he’s excited but doesn’t want to show it.

I have lots of except for Shawn scenarios. All of the kids were vegetarian for the first 18 months except for Shawn. He was eating meat at six months. Everybody slept in their own beds as babies except for Shawn. I was exhausted so he slept with me to keep me from getting up in the middle of the night to feed him.

He’s not scarred for life over the exceptions. At least I don’t think he is. We have more than made up for the lack of pictures. Now it’s Josiah (third born) who I struggle to find photos of on my phone. He doesn’t seem care though. 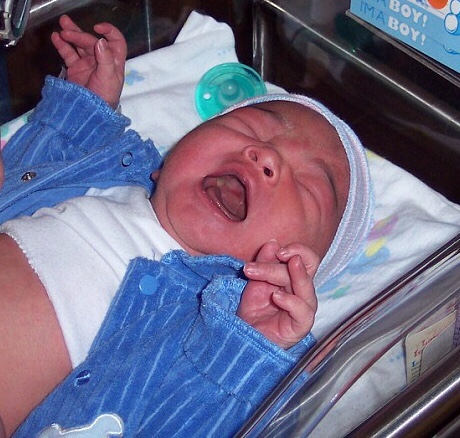 I came home from working out yesterday and saw my two youngest sons standing in the kitchen. The baby of my bunch (he’s 11) was holding an egg slicer with an unpeeled cutie in it over a cup and squeezing with all his might. I asked them what they were doing and they responded, “Making fresh squeezed orange juice!” My response was, “Well that’s not going to work.” I did wonder why they were putting so much effort into that when there’s a juicer sitting on the counter. Is that innovation or wasted energy? It’s hard to tell. Nevertheless I’ll pick up orange juice on my way home today.

Remind me to tell you about the family meeting we had last night.

That’s the number of years it’s been since I first laid eyes on her. My daughter, my honeygirl, my image, my hope realized. I love her with all of me. I love all of my children but my relationship with her is different. She is my only daughter and we “get” each other. We talk with our eyes, slight head movements, half smiles and certain looks. We speak the same none language. We are not best friends. I’m her mom, her guidance, her boundaries, her gauge, her disciplinarian and her sounding board. I’m honored that she wants me in her life. She insists that I become friends with the moms of her friends. I’ve heard her tell friends she has the best or coolest mom ever.

I didn’t have a great relationship with my mom growing up. I would never have referred to her as the best mom ever. I was never sure I could get this mother daughter thing right. Right for me was better than what I grew up with. But I’m getting it right. We are getting it right. I cherish every moment I get to spend being her mom.

She was excited. He hadn’t asked her to go on a date in a while. Then, out of the blue, he asked her. Of course she said yes. It had been a long time since the two of them had spent time alone. They usually did everything as a family. He was big on family time. But he wanted to have dinner with her, alone. He was very casual in his approach. She tried not to show her surprise when he asked. He selected the restaurant. It didn’t matter that is was not her favorite place. He decided on the day. It didn’t matter that she would have had a long day at work. The only thing that mattered is they were spending time together. She was hoping they could talk and maybe laugh a little. They needed this time. It was important to her to build a solid relationship. After all, they were going to be in each other’s lives for a life time.

When they pulled up to the restaurant he got out of the car and opened her door. He was just that kind of guy. She never asked him too. He did it on his own. As they walked to the restaurant, she softly asked him, “is it okay if I hold your hand?” He’s not the affectionate type, at least not in public and rarely at home. He gave her the look. You know the one that says, “you are kidding me, right?” He asked her why he should hold her hand in public. She replied, because that’s what you do when you like someone and you’re on a date. He shoved his hands deep into his pockets and started walking a little faster. She picked up her speed and grabbed hold to his arm. He didn’t pull away. She considered this a small victory. She silently prayed, “let my seven-year old find a wife who can look past his rough exterior to see his tender heart.”

(A date with the Stud Muffin)

On any given day I hear Stud Muffin (7) or Little Dude (8) say, “let me show you how a man does it!” They are usually saying this to each other since Honeygirl and I aren’t all that interested in how a man does something and the Teenager is usually somewhere being a teen. I do watch them when this is occurring because it’s funny and I’ve learned that a man will do lots of manly things if someone is watching and gives him praise.

The Teenager is the person in charge of bug and critter disposal. The younger boys scream like a girl if they see a gecko or even a beetle. Now mind you even the girl doesn’t scream like a girl when she sees a bug but that’s neither here nor there. One morning Stud and Dude were in the kitchen, the other two were still asleep, when I heard a scream. I ran to the kitchen to see Stud pointing at a bug. Little Dude said, “let me show you how a man does it.” He grabbed a paper towel, picked up the bug and put it in the trash. After which his chest was stuck out, his head was held high and he looked at his brother and said, “that’s how a man does it!” I smiled and walked back to my room. I hear that phrase at various time during the day. I always smile at them when they show how a man does something.

Yesterday, Stud Muffin was sitting at the table drinking a cup of hot apple cider. He said, “mom, look at me I’m being a maaaan.” I turned my head to look at him and asked if he wanted to show me his cider mustache, he replied no. I asked him if he had just done something. He replied, no, I’m just sitting here being a man. I nodded and smiled at him.

I don’t pretend to know what it takes to be a man but I have learned what it takes to encourage and speak life into a man. Sometimes it doesn’t require any action on my part. I  am honored to have the privilege to watch them transform from boys to men.